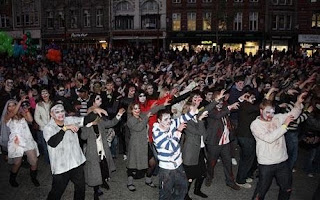 This is quite interesting. It's a world record attempt for the most people performing the dance to Michael Jackson's Thriller. The attempt which took place in Nottingham, England was successful with 1,227 dancing zombies breaking the previous record by 199. So why is this on my blog today?

Because it's almost time for the Never Slow Dance With A Zombie Fest. What is the blah, blah, blah, blah Zombie Fest, you ask? In lieu of having a launch party, and to celebrate Halloween. I will be hosting the Never Slow Dance With A Zombie Fest, featuring a reading, signing, and party where we will Zombie Dance the night away. The room will be decorated as the Winter Dance from my novel. This amazing event will take place on October 24th (exactly one week before Halloween) at a secret location (for now). All guests are encouraged to come in costume. And it's FREE! How do you get on the guest list? I'm saving that, along with several other surprises for later. Stay tuned.

Day 4 was another amazing day of tweeting. My book title was tweeted 944 times yesterday. Day 4 winner is Nfmgirl who tweeted fun statements such as: Father, I cannot tell a lie. It was I who cut down your cherry tree. But on the bright side, I'll NEVER SLOW DANCE WITH A ZOMBIE! and
I kissed a zombie and I liked it, but I'll NEVER SLOW DANCE WITH A ZOMBIE! Don't you just love the way she worked in the title to Adam Selzer's new book. Two book titles in one tweet. You go girl!

There are two more days of tweeting (including today) to go. A Park Avenue Princess is still giving away your choice of the six books. And just one tweet qualifies you for the October 8th grand prize. More information is on A Park Avenue Princess' website-- click here:
http://tinyurl.com/yc57dm4


Today has been an incredibly slow day of tweeting. Only 22 tweets since 12:01 AM. The heavy tweeters seem to be all tweeted out, so it's the perfect opportunity to sneak in and steal yourself a prize. What are you waiting for?
Posted by E. Van Lowe at 9:46 AM