The reading of excerpts from the manuscript of my new book, Hollyweird, went extremely well last night, topped off by my big brother's presence. The reading was held in Sheree's conference room. There was a small crowd present--all seemed to love the book.

Sheree and her young interns loved it so much that she called me this morning to tell me she'd arranged a reading at one of the major studios the first week of December. She's hoping to get a TV deal which will spawn the book deal. It's the reverse of how things are normally done. I am very excited. A book and TV deal for Christmas. Yes!

And my brother really enjoyed the reading. You know how good that makes me feel :-)

Tomorrow we hang with cousins, and then he's headed back home. Tonight, I leave him alone at the crib while I torture myself by going to the Staples Center to watch the Clippers. My brother is not a sports fan--no way could I expose him the bad basketball. I'm a good little brother.

Monday I'm back to work on I Want You Back. Tatiana should have some art work to display some time next week. I haven't seen anything but a prelim of the cover art. I can't wait. These are exciting times. Check back to see what she's working on.

Tonight at 7PM (PST) I read excerpts from my recently completed YA paranormal, Hollyweird. The reading will be held in the very posh conference room of my manager, Sheree Guitar. My entire team will be present: agent, manager, producing partner. I hear a few Hollywood types may show up as well.

The big thrill, however, is that I think my brother will be there. He's in town for a Microsoft convention that ends this afternoon. I know. I'm heading out to pick him up in a few hours. And if he's not too tired, I will drag him to the reading.

He's staying with me until Sunday. Cool. When he was here last year we had a great time hanging together. I hope he comes to the reading. He will make it a very special night, indeed.

If the reading goes well I will prepare the manuscript to go out to my editor for reading during the holidays. And hopefully a sale!!! Check back here tomorrow to hear how the evening went.
Posted by E. Van Lowe at 1:53 PM 2 comments:

So much has been happening in my life lately that I almost forgot--I've been nominated for a Cyblis Award Click here: Wands and Worlds: 2009 Cybils Nominees: Fantasy/Science Fiction Teen. It's really kind of cool, since Never Slow Dance With A Zombie is my first novel and all. Wow!

Also, I haven't licked (see last post) Hollyweird since I wrote about it a week ago. My reading is on Thursday evening. I went through what I was going to read today--about 40 minutes worth. I know--long, which is why it's a small loyal group of listeners. I'm really happy with the manuscript. If the reading goes well I will do a final lick... er, edit and try to get it to my agent and editor next week, before Thanksgiving. I'll keep you posted.

My big brother is in town. He comes to LA once a year for a Microsoft Convention. He's a Microsoft developer--whatever that is. We had dinner last night. He loves Mexican food, and whenever he's here I take him to some of the local hot spots. His favorite is El Cholo on Western Ave. We ate their last night and had a great time. I really enjoy spending time with my bro. He's the best.

And for those of you waiting for my free e-book novella, I Want You Back, Tatiana just read the first 3 installments over the weekend and emailed me that you guys will LOVE them. She's very excited and has started work on her illustrations, so it looks like we're on schedule for Christmas. If you haven't yet signed up to receive the link for the free chapters to be delivered directly to your email, all you have to do is subscribe to my website at http://www.evanlowe.com/ and you will be among the first to read it.
Posted by E. Van Lowe at 9:26 PM 1 comment:

Am I A Book Licker?

Last Thursday I completed the draft of my newest novel, Hollyweird. I've been working on this novel for a long, long, long time. July of 08, Bob Gleason, from my publisher, Tor, was in LA and asked me if I would write a teen urban fantasy series--sort of like Laurel K. Hamilton's Anita Blake series (Click here: Laurell K. Hamilton Official Site ) or Kim Harrison (Click here: Kim Harrison). But instead of being for adults, mine would be aimed at teens. I jumped at the opportunity.

Bob wanted me to do something with vampires. But let's face it, there are more than enough vampire series out there. Right? So, instead I created Hollyweird. A series about a 15 1/2 year old, bi-racial necromancer who lives in Hollywood California. Kris Golden has a relationship with all things dead. She can raise the dead, spot the dead walking among us, but her main goal in life is to help lay the risen dead back to rest. In a sense she's something like a teenage The Ghost Whisperer. That's kind of a cool idea, isn't it? And guess what? No vampires... although zombies do make an appearance in the first book.

I have been editing the book since I finished. Actually, since before I finished, which is one of the reasons it took me so long to finish. And then this evening I read this post (http://www.megcabot.com/dia) on Meg Cabot's blog entitled: Don't Be A Book Licker. A book licker is someone who’s writing a novel, but instead of just finishing it and turning it in, they keep going back and re-reading it over and over, finding tiny things wrong with it, and revising it. They never actually send it in.

Have I become a book licker? I have to be honest, since this is not exactly what my publisher asked for, I am terrified to turn it in and discover they don't want it. That means I'm back to where I was three years ago--trying to get published. Oh, the horror!

I did not lick Hollyweird at all today, thank you very much. Although I thought about it. My anxiety over the book has made me a bit of a wreck. My friends have noticed. I keep saying there's nothing wrong. Do you want me to tell the truth and admit I'm a.... book licker?
Next week I have a small reading scheduled where my agent, manager and some friends will hear the first several chapters. Will I go back to book licking after that, or finally face the music and send it in?

I'm not sure. For now I am going to try and bury myself in my new project, I Want You Back, and not lick Hollyweird for an entire week. 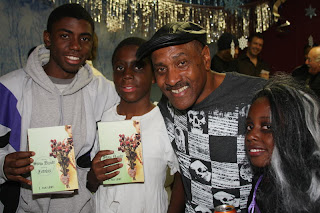 At first blush this photo may seem to be another example of E shamelessly self promoting his novel, Never Slow Dance With A Zombie. But if you look closely, you will notice what is seemingly out of place in this photo--there are two boys, each holding a book... holding a book and smiling.

In case you're not aware, one of the great literary problems in our country and our country's schools is getting boys to read. It's not that boys can't read--boy's won't read. It's as if it's some great badge of courage for a boy to be illiterate.
As stated by Boy'sRead.org: "50% of all male minority students drop out of school." That's not good people. We now live in a country where the majority is made up of a collection of minorities. If most future men in this country don't read, where do you think that will lead us? Both girls and boys need strong male role models in their lives. Often, where one does not exist lives are shattered. And ladies, do you want to marry a guy who not only won't take directions, but can't read the signs? I'm kidding. But you get what I'm saying.

I don't want to get on a soap box and say that books are the salvation of our society. That would simplify it too much. But I do think that it is important that boy's read. Comic books, cereal boxes--anything! A well read boy, is a well rounded man. I did a post a few months ago about how my father and a happy accident got me to become a reader (Click here: E's blog: Thanks, Dad). Had I not become a reader, I am sure I would not have become a criminal. But I'm also sure I would not be the E. Van Lowe we have all come to love... well, most of us :)

What I'd like to ask each of you to consciously do is put something to read in a young man's hands. My friend Lynette told me her oldest son (14) took my book home, started reading and loved it. I am happy he liked my book, but I'm happier that he is reading. Those are Lynette's children in the photo.

I wrote Never Slow Dance With A Zombie for girls. I enjoy writing for girls, but I had boy readers in mind the entire time I was writing. I tried to add enough gross jokes, humor and adventure to keep a boy reader satisfied. It's up to writers to create interesting stories that spark the minds and imaginations of boys. I am going to try hard to do my part.

If your boyfriend, husband or son is not a reader it's up to you to put the right book in his hands to start him down the path. We can do this! One man or boy at a time. If we don't want to see American society on a continuous downward spiral, our boys need to read. Let's start at home. We LOVE to read right? Let's share that love. Nothing wrong with sharing a little love.
If you'd like to learn more about getting boys to read go here:
http://www.guysread.com/