What's So Good About Goodbye? 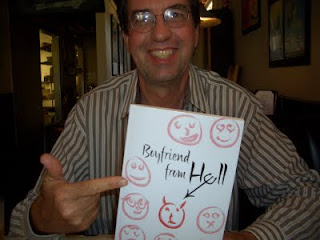 My publisher with an original BFFH Arc in 2011﻿

When I was a kid my brother had a record (yes, there were records back then, 45s, in fact)  by Smokey Robinson and The Miracles with the above title. *Singing*  What's so good about goodbye, all it does is make you cry.  Today that song has new meaning for me.

Last week I turned in the final draft of the final book in The Falling Angles Saga.  And with it, I said goodbye to Megan, Guy, Maudrina and Aunt Jaz.  I've never written a series before so I never knew the feeling of finishing one.  From what I've read, some writers can't wait to get on with their lives, while others have a tear in their eye.  For me it was a little of both.  I'm happy to finish the series.  More than a handful of fans have written me asking about the last book.  For those who've hung around for the entire series, I want it to be a satisfying experience.  I'm happy to give this final book to them.  I'm also excited about what's next.  I've been doing notes on a new book in the horror genre for several months now.  I'm looking forward to this new and exciting challenge, and once again working with my horror writing alter ego Sal Conte (Read: A Few Words From Sal Conte)

But another part of me will miss this series. I really loved writing Megan and Guy.  I call these my growing up novels because I could see my writing improving, getting sharper as the series went on.  I started writing Boyfriend From Hell in 2008, just after I'd made my first young adult book sale with Never Slow Dance With A Zombie Tor/teen).  I've been with these characters for more than five years.  I've had a wonderful time with them.  I will definitely miss them.

It took me so long to write the second half of the last book, partly, I believe, because it was hard letting go.  During the writing of the book (Falling) I thought of all sorts of spinoffs and ways to keep the series alive.  However, now that a week has passed, I'm ready to move on.  I may revisit one or more of the characters later, but for now, it's goodbye.

Those of you who've been waiting for the final book, I'm sorry it's taken so long.  It was originally due out this month.  I won't have an official pub date until some time next month, But I believe February is a fair guess.  I've poured my all into this book.  I hope you think it does the series justice.

So that's this author's take on ending a series.  Saying goodbye is difficult, but moving on is exciting.  And you know what they say about one door closing.  I'm ready.