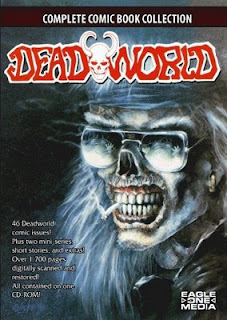 Is it me, or is zombiemania sweeping the nation? A recent article in a major newspaper (either the New York Times or the LA Times, I don't remember) claimed that zombies are replacing vampires. In other words, zombies are the next big thing. Bye bye, Twilight (Yeah, right!) hello, zombies.

The zombie comic book, Deadworld:Click here: Deadworld: Comics and Graphic Novels of the zombie classic! from creator Gary Reed, is about to become a major motion picture. Max Brooks' World War Z shows up on movie screens later this year. There's the game Zombies you can play on Facebook, and even the retelling of Jane Austen's Pride And Prejudice has been zombified with best selling Pride And Prejudice and Zombies.

When I set out to write Never Slow Dance With A Zombie, almost three years ago, I had no idea zombies were in the zeitgeist. It's amazing how so many people can be thinking the same thing at the same time.

Three weeks ago Lauren, at Shooting Stars Magazine, asked me to review a song called Zombies Everywhere :Click here: Shooting Stars Mag: (Party) "Zombies Everywhere"- Authors Talk! When I saw the post with my review I discovered two other fun, zombie novels I knew nothing about: Breathers: A Zombie's Lament, written by S. G. Browne http://www.undeadanonymous.com/ , and The Zombie Queen of Newbury High, by Amanda Ashby http://amandaashby.com/. I am planning to get in touch with Amanda Ashby soon, to see if she'd like to do a reading event together when she's in the US.

Wow! So many zombies. It's a bit daunting. I am either in the right place at the right time... a place I rarely am, or my book is coming out amidst a glut of zombie projects. I'm going with right place at the right time. It's better to be optimistic. And I am in such a good space right now, I am not going to bring myself down with negative zombie thoughts. Is there such a thing as positive zombie thoughts? If you have a zombie novel coming out in September, yes, there is. That's all for now. If you like zombies check some of these out, and if you know of other zombie projects or books that are coming out or have just come out, I'd love to hear about them. It won't bring me down. It will just reinforce my belief that I am at the crest of a zombie tidal wave that will be crashing to the shores September 1st.