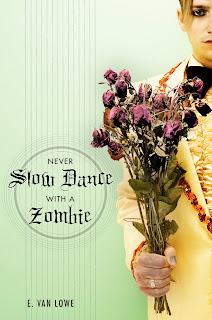 This is the first outtake I chose to share with you. It's a little side story that has nothing to do with the main story (sorry zombie lovers), but tells us a little something about Margot. It's the very humorous (I think) story of her first kiss.
I still remember my first kiss. When I was ten years-old I'd gotten lassoed into a game of spin the bottle by a girl--I realized many years later--who liked me. Being a typical ten year-old boy, not yet into girls, I hated that first kiss. But I used it as impetus for Margot's first kiss in Never Slow Dance With A Zombie. My editor thought the long aside slowed the story down too much. Now I get to share it with you. Check it out:

Technically I had my first kiss six years ago. Everyone thinks I did. Everyone means Sybil. We were at her 10th birthday party. Us kids were left alone in the room and someone—I think it was her cousin, Thomas who was 13 with an oversized head and Milk Dud breath—suggested we play Seven Minutes In Heaven.
For those of you raised on a different planet, Seven Minutes In Heaven is a kissing game. A boy and girl are selected to go into the closet and spend seven minutes kissing—in heaven, get it?
Someone suggested I go in the closet with Sybil’s next door neighbor, Percy. Okay, it wasn’t someone it was Sybil. Percy was this really cute 11 year-old who smelled like cookies and dirt. I’d been crushing on him for some time, and Sybil set it up so that I would be alone with him for seven whole minutes. Seven minutes may not seem like a long time, but to a girl obsessing over her first kiss it can be an eternity.

Percy and I entered the closet and shut the door behind ourselves. I could hear muffled giggles on the other side. I didn’t care. I was about to spend seven… make that six and a half minutes in heaven with a really cute boy.
I could no longer see Percy. But I could hear him breathing.
“Percy?”
“Huh?” His breathing was shallow, his voice quaking, which meant one of two things: either he didn’t want to be in the closet with me, or this was his first kiss as well.
“Um. Hi,” I said trying to sound cheery, which wasn’t all that easy considering I might be locked in the closet with a boy who was dying to get out.
“Um… Margot?”
Uh-oh. This is not sounding good. Were his next words going to be: “being locked in here with you is making me nauseous?” Stop it! Think positive I told myself.
“Yes?” I said sweetly. My heart was in my mouth.
More silence, and then… “I, um… like you.”
Huge sigh of relief. Okay, now we’re getting somewhere. He does want to be in the closet with me, which means Percy is as lip lock challenged as I am. This might be a turn off for some girls, who might want their first time to be with someone more experienced, but I felt it gave me an advantage. He couldn’t say I was a lousy kisser. The only thing he had to compare me to was his Labrador Retriever. And I was certain I could kiss better than a dog.
“They’re awfully quiet in there,” I heard someone say on the other side.
“And I know why,” someone else said, followed by a wave of giggles.
All right, he wants to be here and I want to be here. Now all we need to do is get the tonsil hockey started. I didn’t care that my seven minutes had been reduced to four and a half. I was about to experience my first kiss.
“Percy?”
“Huh?”
“Wanna do something?” I prompted.
“Uh-huh.”
My hint was a bit too subtle for Percy. I needed to be more direct. “This is my first kiss, too,” I said to ease the tension.
“It is? Wow.”
Suddenly I was irritated. “What do you mean ‘wow.’ It’s your first kiss, isn’t it?”
“Heck no! I kiss girls all the time.”
Liar! I thought. “Is your dog a girl?” I asked.
“No. Why?”
“No reason.” Okay, so what if he is a lying jerk. He’s cute, and I’m going to spend Two Minutes In Heaven with him. “Well, Mr. Professional Kisser,” I said with a bit more sarcasm than intended. “Let’s get this show on the road.”

More silence.
“Percy?’
“Huh?”
“Well!”
“Oh. You wanna kiss?”
All right, he was clearly an idiot. But I’d gone into that closet to experience my first kiss, there was no way I was coming out empty handed.
Just then from the other side of the door: “Ten, nine, eight…”
“What’s that?” I asked, nervousness creeping into my voice.
“The countdown.”
“Kiss me!” I said in frantic a loud whisper.
I felt Percy getting closer, closer. I closed my eyes, puckered up.
Smack. Percy planted a wet one in the center of my forehead.
My forehead!
“…three, two, one.” The closet door yanked open. Percy and I exited amidst loud cheers. Percy swooned and fanned himself while wearing a devilish grin. This prompted more, raucous cheers.
Sybil smiled at me and squealed “I knew it! I knew it!”
I winked at her. What else could I do? They were treating me as if I was the world’s greatest kisser. If I revealed that Percy was a fraud who was too scared to give me a real kiss I’d lose my star status.
“You go Hot Lips,” Thomas drawled. It was a nick name that lasted all summer.
Posted by E. Van Lowe at 6:54 AM