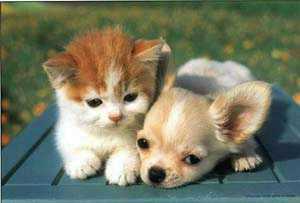 A few weeks ago the lady in my life (I won’t mention her name here.  If you stay with me you’ll see why) suggested we have some together time.
“Let’s get up early one Sunday morning and go out to Venice Beach.  We can rent elliptical bikes, and ride along the bike path together.”
“Elliptical?”
“Yes, just like the machine I like to use at the gym.  You like working out.  You’ll get both a great arms and cardio workout.  And we’ll do it together.”


I don’t use the elliptical machine at the gym.  I used to use the Stairmaster, but 30-45 minutes of going nowhere didn’t do it for me.  But this was different.  We’d be at the beach, riding along in the open air.
She even had a Groupon for a two hour ride.  So Sunday before last, we got up early and headed out to beautiful Venice Beach.  As we got closer to the beach, the sky clouded up.  The weather man calls this the inversion layer.  I was hoping the beach would be sunny, but my lady pointed out that since we were going to be working out, the cool air would be welcome.


We arrived at the bike rental just after they opened for the day.  We signed up for bikes, watched a short video on how to ride the darn things, and then the clerk took us out to the parking lot for a practice run before we headed off to the bike path. 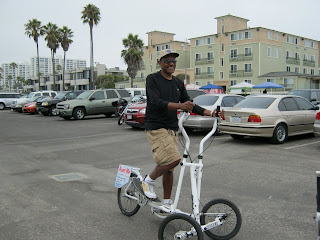 That’s me in the parking lot, getting up on the bike for the first time.
We got on our bikes and I took off around the parking lot.  I noticed the faster I went, the easier it was to hold my balance.  I stopped, looked behind me.  My lady was not there.  I walked my bike back to where she was standing next to hers.  Let me tell you, walking an elliptical bike is not as easy as walking a two-wheeler.  It’s more like walking an octopus.
“You okay?” I asked, out of breath from walking the bike.
“Yes.   It’s different than the one at the gym.  It kind of sways back-and-forth.”
Do I remind her the machine at the gym is a stationery bike, and this is the real deal?  No.  That wouldn’t go over very well.  I said nothing.
A short time later, we made our way to the bike path.
“I’ll be right behind you,” she said.
“I won’t go too fast.  I’ll let you get the hang of it.  But you know, the faster you go, the easier it is to keep your balance.”
“Got it,” she replied.
I didn’t see her again for half an hour.  After riding for a few minutes I looked back and saw that she had stopped.  I figured I’d ride very slowly so she could catch up.  But she didn’t catch up.  After a while, I stopped along-side the bike path and waited.  Ten minutes and probably twenty bikes passed me by.  A group of four on ellipticals (that I had passed a long time ago) went flying by.


I decided to go back.  I figured when I saw her coming up the bike path, I’d make a U-turn, and we could ride along together.  About twenty feet from where she first stopped I saw her alongside the path.
“You okay?”
“Yes.  I’m just getting the hang of this thing.  Don’t worry about me.  You ride ahead, when I see you on your way back, I will turn around and join you.  Don’t let me spoil your fun.”
It was then I decided she should take a picture of me riding the bike. 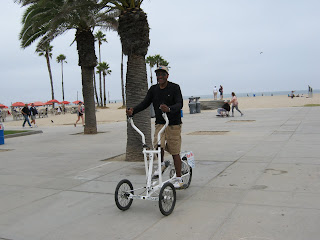 I’m glad I did.  This was the last time I saw her before our two hours were up.  When I got back to the parking lot, she was standing by her bike.
“I thought you might come back here to practice some more,” I said.
“I didn’t practice.  I just came back and waited for you.  Did you have fun?”
“Yeah, but I thought we were going to do this together.  We did do it together.”

Do I point out that the only time we were together was in the car on the way to the beach? No.


Afterwards, we went to lunch.  She told me how much fun she’d had, and that she’d like to do it again.  That’s when it hit me (any guy reading this needs to let this coming part soak in) for a woman, togetherness is not a state of being, togetherness is a state of mind.
“It had fun,” I said as I drove her home.  “Let me know when you’d like to do it again.”
I write paranormal novels about young women, their thoughts, their hopes, their dreams.  I think I just learned something I didn’t know.  Maybe I can use it in my next book.

BTW, I was sore for a week.