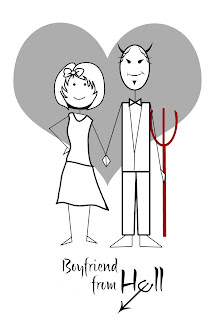 Lots of female friends have told me they’ve had boyfriends from hell. I’ve heard some horror stories and some very funny stories as well. Many women thought they were getting involved with sweet guys, only to find out they were going to hell. But others, many others, chose to date bad boys… on purpose.

In writing Boyfriend From Hell, I tried to deal with what a girl feels dating a bad boy. I created Guy Matson, the handsome, bad boy Megan is instantly attracted to. In truth, I have no idea what it feels like being a bad boy. Although when I was growing up I really, really, really wanted to be one. When I was fourteen I fell in love with a girl who had a thing for bad boys—the guys who ditched school, and drank, and made out with their girlfriends right on the school steps; the boys who didn’t seem to care if they got busted by a teacher or the cops.

One day I got up the nerve to walk Carolyn home from school. She only lived two blocks from school, so I could walk her home and still get home before my mother started a sweep of the neighborhood looking for me. My mom was a stickler for us getting home on time. But Carolyn didn’t know I had a three o’clock curfew. For all she knew, I didn’t have to be home—ever.

“Dancing, huh? I love to dance.” I did like to dance. Of course, it was mostly at home alone in my mirror, or with my mother. But she didn’t need to know who my partner was. For all she knew, I was dancing the night away at wild parties every weekend.

“You should come,” she said.

“Will you be there?” This was the height of flirting for me. My palms were sweaty when I asked the question. What did you expect, George Clooney? I was a fourteen year-old who had to be in the house by three o’clock for chrissake.

“Yes,” she said. The way she said yes left no doubt in my mind, that if I swaggered into that community center looking like the Fonz, Carolyn would be mine.

Friday evening I announced I was going to the community center. Mom didn’t need to know which one. By the time I got there my heart was beating a mile a minute—partly because I was nervous about seeing Carolyn, and partly because I feared for my life. When I arrived outside, Carolyn was on the steps talking to a bad boy who had the youthful swagger of James Dean. He was very close to her, and she seemed to like the closeness. She looked up and saw me.

“Oh, hi, you came,” she said with a smile that was warm and inviting.

“Yeah. I come here sometimes, just to kick it, you know.” I said trying to sound like I had swagger as well.

That’s when I noticed the boy she standing with eyeing me like I was just the person he had been waiting to punch in the face. He whispered something in her ear, draped his arm around her shoulder. She laughed.

“See you inside,” she said.

I nodded and went inside. A short time later I slipped out the side door and went back home. I didn’t know if the boy was her boyfriend. But I knew I wasn’t a bad boy. I could never whisper seductively in her ear, or drape my around her shoulder without sweating out my undershirt. I was destined to be a nice guy. In retrospect, I realize there’s nothing wrong with that.

In Boyfriend From Hell, when Megan is flirting with the idea of being a bad girl she muses: You can’t be a bad girl, unless you actually do something bad. Megan couldn’t fake it, and neither could I.