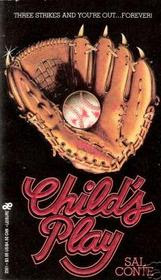 I want to introduce everyone who reads the blog to a new author. He is one of my favorite people. He is the author of the graphic horror novels, Child's Play and The Power... And he is me. You heard me right, I am 80s splatterpunk author, Sal Conte.
A little back story.
in 1980 when I was a student at USC, my greatest goal was to be published. I started my writing career by selling stories to romance and confession magazines. True Romance and True Confessions among others. How I chose confessions was, I wanted to be published, but I needed to get paid for writing fiction if I was going to give up my job and become a full time fiction writer. I'd read in a Writer's Digest article that the true stories in those magazines were indeed, fiction. I surmised that there were eight magazines publishing six to seven stories each a month. Most literary magazines publish one story a month, but with fifty or more opportunities available to be published in this genre, I figured my chances of getting published were greater.
I was right. I sold the second story I submitted, and soon became a regular contributor. The pay was a paltry $40-$150 for a story. I wrote two stories a week with the goal of earning $400 a month. Not every story sold.
Most of my reading at the time was horror--big time. Stephen King and Peter Straub were my faves. I read that King had started out by publishing horror short fiction in magazines aimed at men. So, emulating King, I started writing horror shorts. Again, I sold my second story. These paid far better, $350-$1000 per story.
I was happy. I was making more than $400 a month writing fiction, paying my way through college. I was a success. A professor of mine at USC (Shelly Lowenkopf) didn't think so. I had written the opening of a horror novel in his class, and he asked me what I was doing with the book. "Nothing," I responded. "I make four bills a month writing short fiction." I know, I had no vision.
He thought the book was terrific, and at his prompting I finished it. This was my first novel, Child's Play (not the Chuckie movies, which I love and wished I'd written, but no)
I decided to write under a pseudonym. Why I chose Sal Conte is a story for another post. You now know more about me than I thought you'd ever know. But here comes the big news. The books were published by Dorchester, under their Leisure Imprint. Last Friday I read about authors boycotting Dorchester because of what they were doing with their digital rights. "Wait a minute," I thought. "Sal's books (yes, I call him Sal, as if he's another guy) have digital rights that I own.

So here's my announcement. I am going to republish Child's Play and The Power as digital books available on the kindle and Nook for 99c. I am even starting work on a new Sal Conte novella. The Sal Conte books will come out after Boyfriend From Hell (which is coming in September, friends), in October or November.
I am not asking any of you to purchase them. I am sure I will get a few sales from 80s horror aficionados. I just thought it was high time you heard a bit more about my literary roots. So, there you have it.