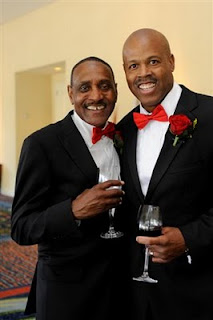 My good friend, Carl, got married recently and asked me to be his best man. I chose this photo of us because for a couple of old dogs, we look gooood.

I live in Los Angeles, a town that treats friendships like disposable diapers—any crap comes up and they’re gone. I’m from New York, the East, where we understand that friendships, like all relationships, have their up and downs. I have a friend in Rhode Island who met her best friends in grade school. She’s in her thirties and they’re still her best friends. Out in LA, lasting relationships are rare—which makes my relationship with Carl all the more special.

When he asked me to be his best man, I was surprised. Carl and I haven’t hung out regularly in many years. But our friendship has gone through its ups and downs, and we still feel like brothers. I was honored to say “yes.”

Carl is a great guy. He’s always been a hard worker, and he raised his daughter alone. That’s partly what attracted me to him. We were young guys, but he was serious about his parenting. I respected him for that.

Carl, I wish you and Dorinda the best. She’s got herself a great guy. I love you, brother.

…And finish that damn screenplay, or I’ll put you on blast on my blog ;-) It's really awesome.
Posted by E. Van Lowe at 1:04 PM